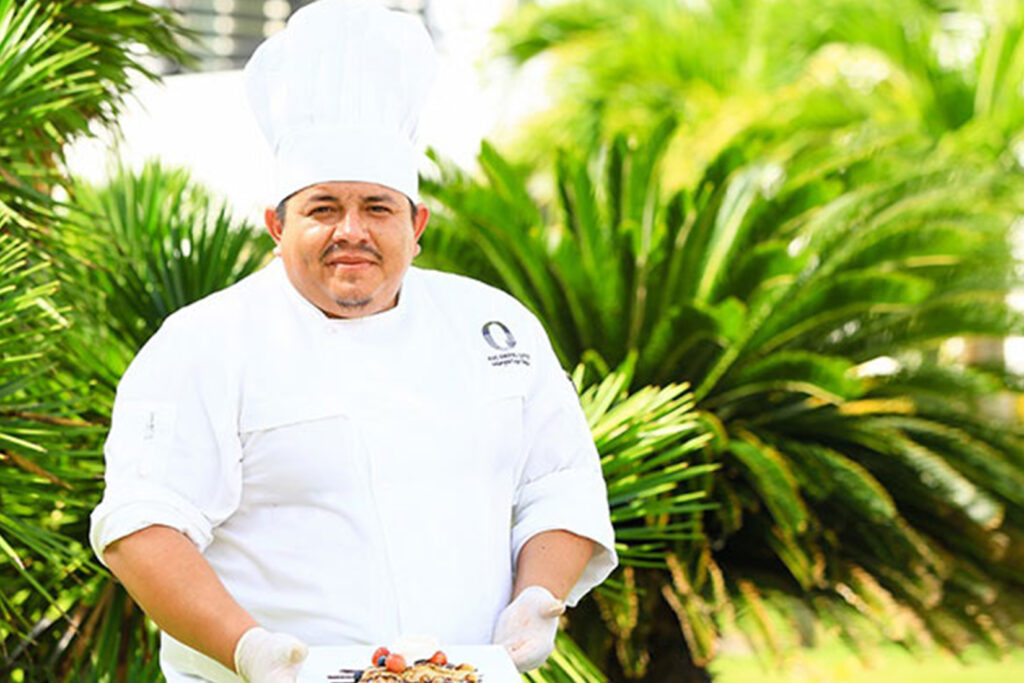 If you are looking for a fine dining experience on Ambergris Caye, then look no further than Las Terrazas Resort's very own O Restaurant! A local dining favorite known for its eclectic fusion of local and international flavors, O Restaurant boasts mouth-watering fresh, seasonal, and locally sourced ingredients that will leave you wanting to come back again and again while visiting us on Ambergris Caye.

O Restaurant is run by the talented Chef Nolvin Catalan who brings a combination of personal passion and skillful expertise to the table. His menus are constantly evolving, showcasing everything from classic Belizean favorites to his very own signature recipes, including but not limited to authentic Fry Jacks for brunch, locally caught snapper or filet mignon seared to perfection for dinner, or the famous Bailey's-infused chocolate sea urchin for desert. No matter what you order, his artisan dishes powerfully display his creativity and innovation in the kitchen.

Guatemalan by birth, Chef Nolvin's family fell in love with Belize while on vacation and made Belize their own by the time he was just one year old. He grew up in San Ignacio, located in the western part of the country among the foothills of the Mayan mountains, and still calls it home. In fact, despite working on Ambergris Caye full time, he returns home to mainland Belize on his days off, to reunite with his wife of seven years and spend quality time with his two young sons, ages five and two.

A chef for more than half of his life, Nolvin began cooking at just fifteen years of age. What started off as just personal interest, Nolvin began without any training and learned kinesthetically through his own hands on experience. He began his hospitality caareer as a dishwasher, where he continued cultivating a love for all things culinary and was thankful for small opportunities to prep simple dishes such as salad and pizzas. From there, his opportunities grew; he earned a culinary certification upon completing a six-month course at the Belize City Center Institution of America. As a part of his formal training, he had to cook for and complete written tests to be approved by the American chefs who ultimately certified him. From there, his opportunities grew, and he soon found himself working and cooking for the renowned Francis Ford Coppola. He was brought on as a chef at one of Coppola's many luxe resorts, the Blancaneaux Lodge, where he worked for the next seven years. He later enjoyed a short stint at the San Ignacio Hotel Steak House before joining the Las Terrazas Resort family where he has remained for the past eight years.

Having been the Executive Chef now for the past two years, Nolvin is finding his rhythm in the O Restaurant kitchen. Despite his title, he does not see himself as above the cooks he manages, but rather loves being behind the stove himself. Though he oversees a staff of 11, he is known for working among them rather than over them and spends the majority of his days inside the kitchen doing hands on cooking alongside his team. He has a special affinity for Italian cooking, which is seen displayed throughout his menu choices. He loves homemade pasta and makes it fresh every day; his signature seafood risotto and goat cheese ravioli rival those found in Italy! He wants guests to Ambergris Caye to experience true, authentic Belizean cuisine, so his menu items focus on Central American and Belizean fare with daily specials that showcase his talent. A true Chef, he would emphatically argue that everything fresh is better, so his locally sourced and freshly caught menu items are made right to order. Rather than ascribing to the adage that "Chefs know best" and that their dishes should never be modified, Chef Nolvin prides himself on catering to his patron's preferences.  He makes fish to order, considers guests' allergies, and allows guests to create their own dishes that he promptly sets into motion in the kitchen. He loves to be kept on his toes and thrives off of the challenge he receives when guests have a hard time deciding what to order and ask him to surprise them!

Hands down, Nolvin's favorite part of his job is dinner time at the hotel. The atmosphere is fun and lively, and he enjoys coming out from behind the stove to meet guests and make sure they are enjoying their food. His hope for all guests of Las Terrazas Resort is that they would have a fabulous and relaxing dining experience, enjoy their stay in our boutique beach resort, and experience all the country has to offer, from the Mayan ruins to the Barrier Reef and diving below the aquamarine waters just off our property.

Chef Nolvin is known for his fun and playful cooking style. Though he is without a doubt a fine dining chef, he also brings personality and fun to his kitchen. He does so much more than just offer an elegant dining menu but is often hosting fun Pop Up events for the Las Terrazas Resort community. For example, Nolvin hosts a roof top dining event at the hotel called Taste of Central America; presenting as a tasting bar (complete with a complimentary Belikin Beer!), you can sample the classic dishes of our neighboring Central American countries. Friday nights are Sushi Night, where he loves to hand prep sushi himself. Sushi Night features everything from tuna, salmon, eel, unagi, lobster, and lobster rolls. Chef Nolvin is also known not only for setting up a Crepe Station for guests, but also for offering cooking classes for resort guests. He even spices things up by making his very own hot sauce for the restaurant (ask us how you can take some home!). Truly his presence in the kitchen and among resort guests make this Chef one who stands out from all the rest.

We can't go without mentioning that Chef Nolvin is also intimately involved in our Belize wedding packages. All our destination weddings and special events include menus prepared by Chef Nolvin and his culinary team.  While we offer a full array of Banquet and Catering Menus, many of our brides ask for customized menus exclusively for their special event. Along this same vein, our Private Beach Dinners for 2 (or small groups) have hand selected menus by Nolvin as well. This intimate dining option features a custom three course menu created by Chef Nolvin with input from the guest of their likes and dislikes.  It includes their choice of red or white wine to compliment the dinner.  Couples or small groups will be graced with the presence of their very own private dedicated server attending to their needs.  As this dinner is so popular, it should be booked in advance. Please note that we accept no more than two per evening.

Well known throughout Ambergris Caye, Chef Nolvin gets nothing but rave reviews. His blackened fish is a popular fan favorite as well as his curried fish over coconut rice. A simple TripAdvisor search will show that he is a beloved and favored chef by all who encounter him on Ambergris Caye. Reviews claim that he works magic in the kitchen and goes above and beyond in impressing guests by cooking up their fresh catch. Despite working in a humid environment with outdoor seating, Chef Nolvin overcomes the challenges with humility and grace. He serves his food right away so it stays fresh and hot and even manages to get decadent desserts on the table without them melting on the way. Those who know the Ambergris Caye's humidity will understand the culinary challenge, but Chef Nolvin does it well and even his most chilled and refreshing desserts are able to make it to guests intact; though the fact that they are so scrumptious and easily scarfed down surely attributes to this as well.

On his less hectic days off, Chef Nolvin enjoys relaxing at home and spending time with his family. His much-needed days off allow him to focus on taking care of his wife and kids and doing what he does best - cooking for them. But lest you think this fine dining chef pulls out the works for his family, he is quick to tell you who the boss really is, laughing as he says that it is his five-year-old son who runs the menu at home! While he is known for his exquisite flare and fine dining dishes at O, he finds cooking at home to be much different. There he sticks to cool, local fare like fresh tortillas, savory cooked beans, and enjoys a traditional wood burning stove called a Fogon where he cooks beans and corn that are infused with a nice, smoky flavor. Aside from relaxing at home, spending time with and cooking for his family, Chef Nolvin also enjoys having beach barbeques and fishing. In fact, he is known to fish right off the famed Las Terrazas Resort dock and heading back to the O restaurant kitchen where he cooks his catch, noting that baked or fried fish is his favorite. He is also quite the humble servant, known for spending his time cleaning up the island amongst others in the Las Terrazas Resort family.

Chef Nolvin is truly a star among our resort staff and we can assure you that once you experience his dining, you will be left completely satisfied with full bellies and hearts. For guests staying with us at Las Terrazas Resort or simply visiting the island of Ambergris Caye for the day, we invite you join us for breakfast, lunch, or dinner for a taste of Belize. Reservations not required; however, we do recommend reservations during holidays such as Thanksgiving, Christmas, and New Year's Eve as well as private beachfront dinners. Our friendly Reservations agents can assist you with planning your meals, or you may contact the Front Desk locally at 226-4249.